NOOSA – A year after the publication of ‘My Walk to Equality’, Papua New Guinea’s first-ever collection of essays, stories and poetry written entirely by women, the Paga Hill Development Company has awarded a writers’ fellowship to the book’s editor, Rashmii Bell. 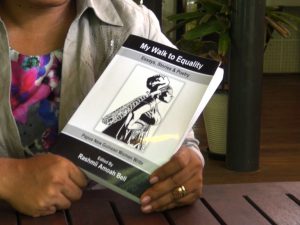 The inaugural award was made to mark International Women’s Day by the company’s chief executive, Gudmundur (Gummi) Fridriksson, a prominent supporter of PNG literature.

The six-month fellowship will enable Ms Bell to attend literary events in Australia and continue to engage with authors, readers and festival committees to promote PNG women writers, PNG literature and explore opportunities to stage a literary event in PNG later this year.

“We appreciate the continued contribution made by Mr Fridriksson and PHDC to assist contemporary PNG writers develop a sustainable national literary culture”.

She described the fellowship as another milestone for PNG writers under the mentoring of PNG Attitude publisher Keith Jackson) and Pukpuk Publications publisher Phil Fitzpatrick, whose 12-year-long effort in publishing and promoting PNG-authored literature continues to yield positive outcomes.

“The past three years have been terrific for the development of a large number of PNG writers,” Ms Bell said. “This has included increased exposure in PNG and internationally.

“Hosting a literary event for our aspiring and established writers, illustrators, publishers, sponsors and literary administrators to meet, inspire and share ideas will be a real high point which will build momentum.

“We urge the national government and private corporations to show the same commitment as PHDC and other dedicated financial supporters.”

Ms Bell has spent the last year actively encouraging PNG’s national literature by engaging with writers and NGOs and she is currently on the editorial team of the national book project, ‘8 Million Possibilities’ initiated by PNG Career Development Inc.

Having chaired panels of PNG writers at international literary events in Brisbane and on the Sunshine Coast, Ms Bell is certain that PNG has the capabilities to host a significant festival of its own.