Following the outbreak of World War II, as well as ominous signs that Japan was preparing for military aggression in the South-West Pacific, in 1941 the Australian government debated over strengthened defences in Darwin and Port Moresby. Australian forces would arrive in Port Moresby in March 1941, and following Japan’s entry into the war that December, Port Moresby’s defences were strengthened. In recognition of Paga Hill’s strategic value overlooking the harbour, artillery batteries were installed, as well as indicator loops to detect the entry of submarines into the harbour. These would ultimately be decommissioned in 1946.

The bunkers and gun emplacements would remain at Paga Hill, with guns and some other items relocated to the Port Moresby National Museum. Members of the Paga Hill informal settlement would eventually take up residence in the structures, which had no ablution or running water supply facilities. 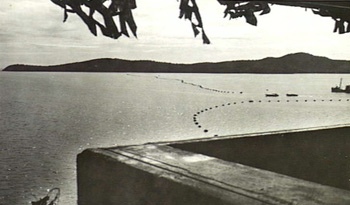 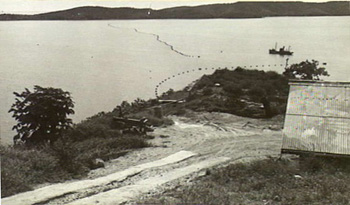 Paga Hill as a National Park

Recognising its historical significance and tourism potential, the undeveloped area of Paga Hill was declared as a Scenic and Historical Reserve by the Lands Minister in January 1987. Following the declaration, the Department of Environment and Conservation, in collaboration with the National Capital District Commission (NCDC) undertook a joint effort to install basic recreational facilities such as barbeque facilities, tables, picnic sites, resting places and lookouts.

Unfortunately, due to increased law and order problems in the area and continuous financial constraints faced by the National Parks Board, maintenance and management of the area was discontinued. With the area left unmanaged and unmaintained, together with relics and tunnels being occupied by settlers, Paga Hill was far from an idyllic national park and tourist attraction.

As a requirement of the Urban Development Lease (UDL) acquired in 1998, PHDC would devise an approach to dealing with the remnants of World War II that remained at Paga Hill. At the time, neither PNG’s National Museum or Department of Environment and Conservation had an account of these items. It would be PHDC that commissioned the first survey of these items, using contractors with expert knowledge in the area.

Paga Hill’s defences comprised two six-inch gun emplacements, a command post, bunkers and structures for a command post, search light, munitions and other stores, as well as a bomb-proof shelter. One of the structures atop the hill was used to power indicator loops – long submerged cables extending across the harbour used to detect the presence of enemy submarines – but would eventually be taken over by PNG Telikom for the purposes of an adjacent antenna.

A recent web-based historical account of Port Moresby’s harbour defences, as compiled by Dr Richard Walding of Australia’s Griffith University, can be found at http://indicatorloops.com/portmoresby.htm