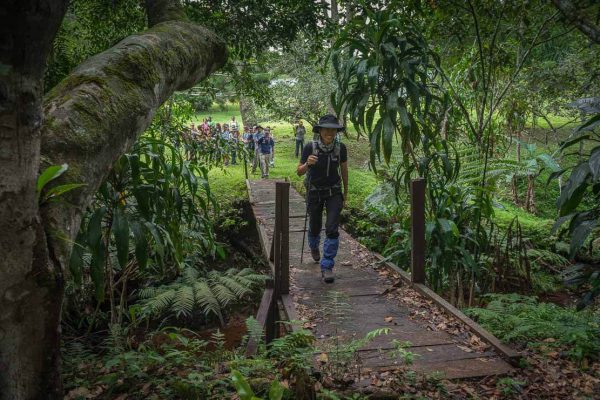 Known for its natural assets, Papua New Guinea remains a paradise almost untouched by the modern world. Yet even within this pristine environment, there are further havens to behold and explore.

A vast portion of Papua New Guinea has been set aside as an example of this preserved paradise.

Papua New Guinea features large tracts of land that have been dedicated as National Parks or wildlife sanctuaries, offering a wealth of unique opportunities and adventure for intrepid tourists to explore.

From volcanic regions, to coastal oases, they encompass the finest examples of untouched landscapes, biodiversity, flora and fauna. With such a vast array to choose from, here are 10 that are considered among the best.

Situated on the outskirts of Port Moresby, Moitaka Wildlife Sanctuary specialises in the study of crocodiles but also houses a mini zoo with further native animals and birds.

The facility acts as a research and education facility that protects endangered species. It is open to the public with an information centre and outdoor recreation facilities.

As a refuge from the hustle and bustle of the city, Port Moresby Nature Park features over 250 native animals including birds of paradise, cassowaries, kangaroos, snakes, crocodiles and parrots.

Thousands of tropical plants are also on display, such as ginger, palms heliconias and native timber species.
Kokoda Trail

The historic Kokoda track has now been granted National Park status in a bid to protect and preserve this 96-kilometre trail. Over 4000 hikers take on this challenging trek each year, which includes features such as the 2190m high Mt Bellamy, and natural rainforest.

With beautiful scenery and spectacular views, this national park is located on a mountainside 11km from the provincial capital of Goroka.

Featuring a guest lodge, barbecue facilities and laboratory, Baiyer River Sanctuary was established in 1968 for the protection of endangered species of wildlife fauna and to encourage breeding whilst in captivity.

The park is located north of Mt Hagan and renowned for its colourful birds of paradise.

Pokili Wildlife Management Area
Protected since the 1970s, Pokili Management Area is famed for its thermal activity. It features hot springs, geysers and boiling mud pools, and is a prime location for scrub fowls who use the warm earth to hatch their eggs.

Designated as a wetland of international significance, Lake Kutubu is located 50km southwest of Mendi. It is Papua New Guinea’s second largest lake and the largest body of water in the highlands.

This tranquil region provides a refuge for birdlife, butterflies, reptiles, turtles and 13 species of endemic fish.

With the country’s largest waterfall that plunges 100m into the basin below, Wasi Falls is known for its picturesque waterways, pristine rainforest and rich array of birds and wildlife.