WHEN three Papua New Guinean writers visited Noosa as part of a pioneering literary visit to Australia for the Brisbane Writers Festival, Julie Kumbon, the wife of writer Daniel Kumbon, wondered what awaited her.

It was her first visit to Australia and she related her impressions to Daniel in her traditional Enga language. These have been translated for Noosa News readers:

Before leaving my highlands home at Wabag in Papua New Guinea’s Enga Province, I was wondering what kind of place I was going to. Having seen some action movies about Australia in PNG, I thought I would see violence and rough people on the streets, especially in cities like Brisbane and Sydney.

But there was none of it. I think action movies are an illusion that give a bad image of peace-loving Australians. As soon as I landed at Brisbane International Airport, I saw that Australia was beautiful. 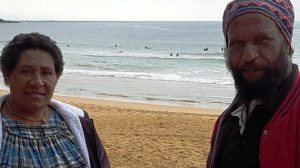 A lady in Noosa offered to take my photo in front of the Noosa Blue Resort where we stayed. She told me her dad had fought in New Guinea during the war and that she was happy to meet me. I have seen clean streets, beautiful parks and even saw a lady walking her dog in a public place in Noosa and picking up its excrement using a plastic bag and dumping it in a rubbish bin provided by the Noosa Council.

Australians know how to enjoy life. They create heaven on earth and I think many of them will go to heaven. They are so kind, happy and willing to help each other.

I think they live less stressful lives and that’s why they live longer. I went into many Australian homes, ate with them and shared jokes with those who could speak Pidgin. I sensed that I was accepted as I was – an illiterate woman from a remote province up in the highlands of PNG who was on her first trip overseas.

The streets are designed with everybody in mind – the mother with a baby in a pram, the old men, a person in a wheelchair. That’s why we were able to take our wheelchair writer Francis Nii to many interesting locations in Brisbane. I wish our towns and cities in PNG could be designed in such a manner. I take many memories with me back to PNG but the one that stands out is me standing beside my husband to give presents at the Jacksons’ home in Little Cove to Hon Glen Elmes MP, Noosa Mayor Cr Tony Wellington, Deputy Mayor Cr Frank Wilkie, Cr Ingrid Jackson and many Australian friends including the youngest of all, three-year-old Leilani.

And finally, I thank Paga Hill Development Company, Keith Jackson and Professor Ken McKinnon, Ben Jackson and organisers of the Brisbane Writers Festival for treating me as an equal to the PNG writers. I am a mother of five children and what I will do now is encourage my children to read and write more.

I know the problems my children’s schools face – no libraries, no books, no properly trained English teachers and so on but, despite the odds, it is my duty as a parent to encourage them to read and write more.