DAME Carol Kidu’s move to sue makers of the documentary, The Opposition, in the Australian Supreme Court has been applauded by former Paga Hill settlers.

According to Paga Hill community development committee chairman, David Kemi, central character in the film, Joe Moses was portrayed as the settlers’ saviour in a “David and Goliath” battle. However, Mr Kemi remembers Moses’ role differently. 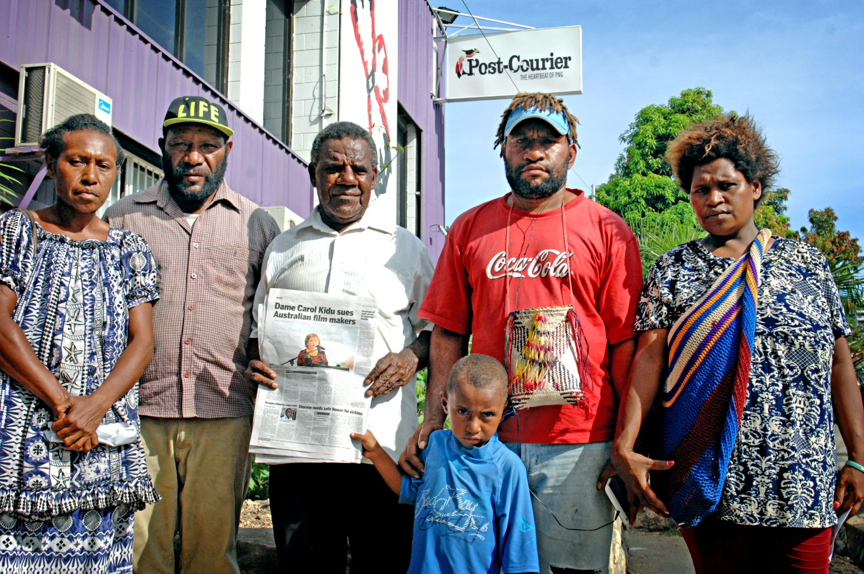 Paga Hill settlers; (From Left) Joe and Julie Konio, David Kemi, Sent and Molly Raim and their son, Jordan and a copy of Tuesday’s Post Courier stating Dame Carol Kidu’s intention to sue the Australian makers of the film, The Opposition

“Dame Carol made it clear that we would be relocated as part of the city’s urban development phrase. We’ve known that since 2002. Then Moses moved into Paga Hill in 2010 and went around convincing people to stay, saying we would win in court. He went around collecting money for legal fees with no receipts as to how he spent the money. It was a lost battle that gave people false hope as Paga Hill is a state land and we were just settlers.”

“People could have moved two years earlier, saved their hard-earned money and started to build their lives somewhere else.”

He added that he was not pleased with the way they, as well as PNG as a nation, was portrayed in the international arena.

Earlier this week, Dame Carol Kidu started legal action in the Australia Supreme Court against the makers of a film, alleging misleading conduct in contravention of the Australian consumer law.