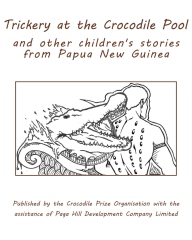 Trickery at the Crocodile Pool and other children’s stories from Papua New Guinea, edited by Benjamin Jackson, Crocodile Prize Organisation with assistance of Paga Hill Development Company, ISBN/EAN13: 1517578639 / 9781517578633, 94 pages, available from CreateSpace here for $US5.38 plus postage.

THIS collection of 33 children’s stories originally entered in the Crocodile Prize was meant to have another title drawn from the award-winning story.

But the winning story – in a contest so generously sponsored by Paga Hill Development Company (who also bankrolled the publication and distribution of this book) – is absent from this volume.Without disclosure to the contest organisers, the author had entered into a contract with another entity for the story and its accompanying illustrations, and this precluded further publication in this book.Very poor form indeed. But such are the vicissitudes of publishing.

Nevertheless this collection, skillfully edited by Ben Jackson and including 33 of the best children’s stories submitted in the contest, fairly rattles along and must certainly inspire young Papua New Guinean readers with tales from their homeland.

These writers, including many previous prize winners, bring a sense of real quality to this initial project that spun out of the main Crocodile Prize contest.

As Paga Hill chief executive Gudmundur Fridriksson writes in the foreword, “Each story is written from the heart and the book brings to life a unique collection of work to educate children and to ignite an interest in reading and writing from an early age.

“The storytellers in this book are in many ways educators, sharing experiences, cultural values, lessons and wisdom. Every story offers a child an opportunity to learn.”

Mr Fridriksson goes on to say that the Paga Hill Development Company Award for Writing for Children is designed to both encourage writers in PNG to cater for a young audience and to inspire children exposed to their own literature to take a greater interest in reading and writing.

“Reading can change our sense of what is possible,” he says. “It can open up a whole new world of imagination and realisation.”

Editor Ben Jackson – who has done such a fine job with this book – has close connections with Papua New Guinea through his company Jackson PR Associates and his editorship of the Bougainville 24 blog, itself an innovator in showcasing the talents of Bougainvillean writers who would otherwise struggle to be published.

Yesterday, I ordered the first 110 copies for distribution under the Paga Hill sponsorship. Because of difficulties in postal services between the United States and PNG, distribution will be done from Australia, mostly occurring in January-February.

Daniel Kumbon of Wabag got in early with his order. If you would like to distribute copies to local schools and libraries in your area, drop me an email here with your postal address and a note telling me about your distribution plans.

We’ll be making available a maximum of 10 copies per person to achieve the widest possible distribution throughout PNG.