Skip to content
Previous Next
Trobriand Islands – A unique culture 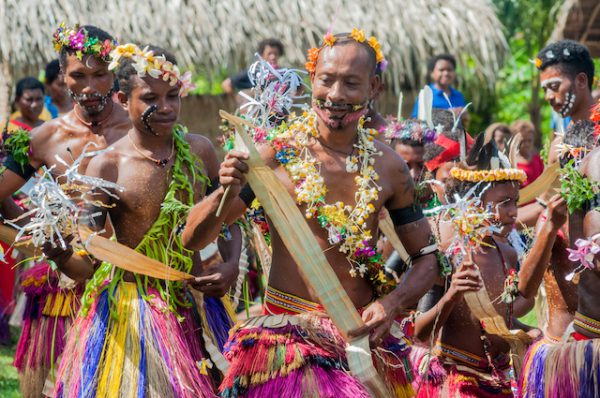 A 450km cluster of low-lying coral atolls off the eastern coast of Papua New Guinea (PNG), but literally a world away from anything you’ve ever known are the Trobriand Islands. Consisting of four main islands, Kiriwina, Kaileuna, Vakuta and Kitava, the Trobriands remain one of the most culturally intact places in the world. As a visitor to the Islands you are bound to find it one of the most fascinating cultures as well.

The majority of the indigenous inhabitants call Kiriwina home. The Trobrianders or the Trobes as they are known locally inherited their name from Denis de Trobriand, the first lieutenant on D’Entrecasteaux’s expedition, the first European visitors to the Islands in 1793. Often referred to as the ‘Islands of love’, the people with their distinct Polynesian appearance are, to put it simply, beautiful. With a social structure based on strict matrilineal clans that control land and resources, there is no denying that it’s the females and their beliefs that are what draws so much curiosity about this culture. From as early as 13 and 14 year of age, children are encouraged to pursue potential partners and to change them frequently. This is not just a practice left to men, but women are equally as assertive in perusing or denying potential partners. The Islanders idyllic laid back culture could perhaps be attributed to their liberal views and encouragement of premarital sex. In fact, it is encouraged so much so that every village is the proud owner of a special hut known as a ‘bukumatula’ where unmarried teenagers retreat to make love.

When it comes to marriage, a relaxed but specific approach is taken. Before a Trobriand couple decide to marry, they will, not unlike many Western cultures, spend much time together. However, there is no expensive, fancy wedding, but rather a gift is offered and accepted by the parents of the prospective girl and rather than the girl leaving the boy’s house before sunrise after a night together, she stays. In the morning, the parents of the girl will bring a feast of cooked yams and when the couple eat together, the marriage is consummated. Over the course of the next year, the married couple will continue to eat together before returning to eating separately. Despite a widespread knowledge of reproduction and modern medicine, the traditional belief surrounding pregnancy remarkably still holds true to most Trobriand Islanders. It is believed that in order to fall pregnant an ancestral spirit known as a ‘Baloma’ must enter the woman’s body, while the man’s job is to simply open the woman up to pregnancy. Once the baby is born, the mother’s brother presents a harvest of yams to his sister to ensure that the baby will be fed from food from its own matrilineage.

Yams play a significant role in the culture of the Trobriand Islands. Used predominantly as currency, they signify wealth and power. In all of the Trobriand major life events, birth, marriage, death and even divorce, yams are the common denominator. Not surprisingly, the yam is also the staple food. The illustrious yam has certainly been placed on a pedestal, high above any other vegetable grown on the island. So much so, that every year from June to August the Milamala Yam harvest festival is held. The festival begins with a parade of men carrying the newly harvested yams from the garden storage hut to the village yam houses. While this takes place the women go on ahead and festively dance and sing. During the festival, traditional rites are observed and festival goers don their best traditional attire.

Although culturally significant, it’s not all about marriage and yams on this peace-loving Island and visitors will find much to keep them occupied. One such attraction is Kalopa Cave at the northern tip of Kiriwina, about 1 1/2 hours walk from Kaibola Village. Here you will find several deep limestone caves which are home to antiquities and skeletal remains. Omarakana is another place worth noting as this is where the island’s supreme Chief resides. About halfway between Losuia and Kaibola you will find the Chief’s residence – a large intricately painted yam house on stilts. He is often found sitting under his house surrounded by his clansman. His role includes reigning over the island’s oral and magic traditions as well as the all-important yam festival. While it is possible to pay the Chief a visit, it’s culturally appropriate to keep your head lower than his and a small gift certainly won’t go astray. Trobriand Islands are well known for their exquisite carvings made from local timbers including the much sought after ebony. There are also war relics, stretches of white sandy beaches and coral filled offshore islands to keep you busy during your stay on the Islands.

Any place where the locals settle minor conflicts with a good game of unisex cricket and continue to live an idyllic traditional lifestyle has our vote. One way to experience the Islands is aboard a Cruise Liner such as P&O Cruises which sail regularly from Australia.  At Paga Hill we believe the Trobriand Islands to be one of the most charming places in PNG in which to enjoy the fun-loving and peaceful culture of Milne Bay Province.