A slice of Papua New Guinea’s WWII war heritage is set to be preserved, with Paga Hill Estate continuing its mission to retain and interpret the war relics situated on Paga Hill.

Known as a strategic vantage point in the battle for the Pacific, this hill overlooking Port Moresby first became a key defence site in the late 1930s, and still, elements of the bunkers, battlements and gun emplacements remain to this day.

Overlooking the Coral Sea, Paga Hill was a natural site of interest when it came to shoring up Port Moresby’s defences during escalating tensions before WWII.

In fact, as soon as war was declared in Europe 1939, attention turned to securing this strategic vantage point, with the construction of a battery range.

But it wasn’t until 1941-42 that defences really began to take priority. At that stage, Japan had entered the war, and the Allies began to be increasingly concerned Port Moresby and Papua New Guinea were vulnerable to attack by sea.

Indicator loops to detect submarines were installed in the Basilisk Passage in 1942, along with controlled minefields, and contact mines at Bootless Point.

In the end, it wasn’t by sea that the Japanese Imperial Army aimed to invade Port Moresby. Rather, they took their chances over land, attempting to enter the city by the infamous Kokoda Track.

In 1946, the Paga Hill Battery Range was decommissioned and in the years that followed, gradually fell into disrepair.

In 1987, the site’s historical significance and tourism potential were recognised, and the undeveloped area of Paga Hill was declared as a Scenic and Historical Reserve by the Lands Minister.

However, plans to establish it as a recreational facility area with barbeque facilities, tables, picnic sites, resting places and lookouts never really came to fruition.

Early in the project, Paga Hill Development Corporation commissioned the first survey of these items, using contractors with expert knowledge in the area. They noted the defences comprised two six-inch gun emplacements, a command post, bunkers and structures for a command post, searchlight, munitions and other stores, as well as a bomb-proof shelter.

These relics are planned to be incorporated into a redevelopment program as part of a project that includes public open space, public walkways, as well as a broader cultural precinct. 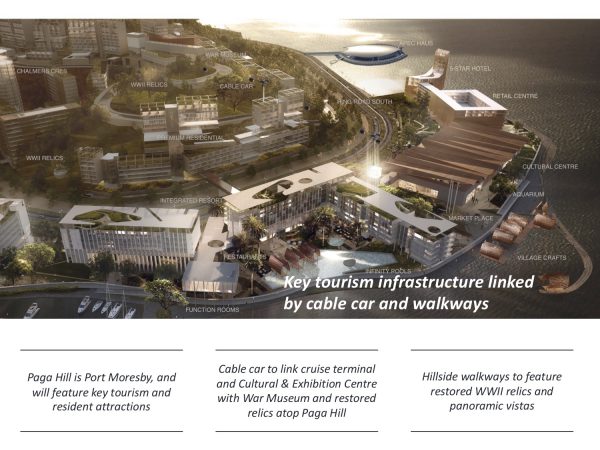 Taking its cue from famous landmarks like Australia’s iconic Bondi to Coogee Walk and Singapore’s Fort Siloso war relics, the Paga Hill restoration will combine history with public amenity, allowing the story of Port Moresby’s WWII story to be explored by local residents and visitors alike.

A cable car is proposed to link the Paga Hill cruise terminal and cultural centre with a war museum atop the hill.

Walkways with stunning coastal vistas will wind their way through the site leading guests on a journey of discovery where they will encounter restored relics and recreated historical scenes explaining the battery’s history.

Ultimately, it is envisaged the Paga Hill Battery restoration will be a drawcard for tourists and Port Moresby residents that will capture, preserve and showcase a defining period in the history of PNG.